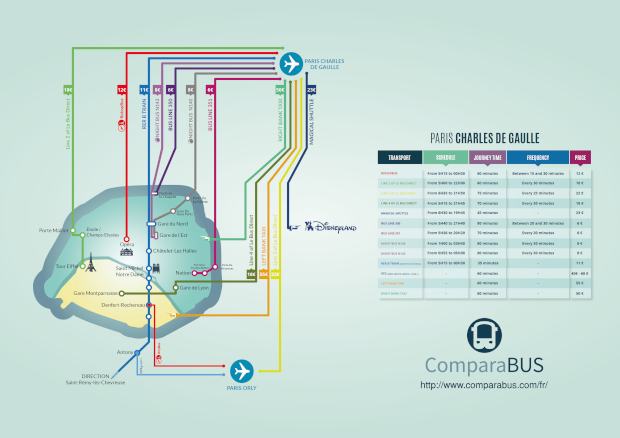 If your flight is to Charles-de-Gaulle (CDG) airport and you do not know how to get Paris city center, here is all the information you need to know to go to city center. Charles de Gaulle (CDG) airport located around 25 km away in the north east of the city. Airport has 3 terminals it would be timesaving if you check landing terminal beforehand to see transport options to Paris city. Here is detailed information regarding with terminals and transport options to city center.

Terminal 1 – if you would like to use RER train after immadiate landing, It has its own RER train station, seperate from Charles de Gaulle airport train station at terminal 2.

Terminal 2 – it’s the largest terminal but it is easy to find bus shuttles specially there are several bus stops around various sub-terminals. If you prefer train connection to city, it can take some minutes more to reach to east of the string of terminals.

Terminal 3 – it’s used by charter airlines and no frills. You may need few minutes to walk to termineal 1 for bus and train services.